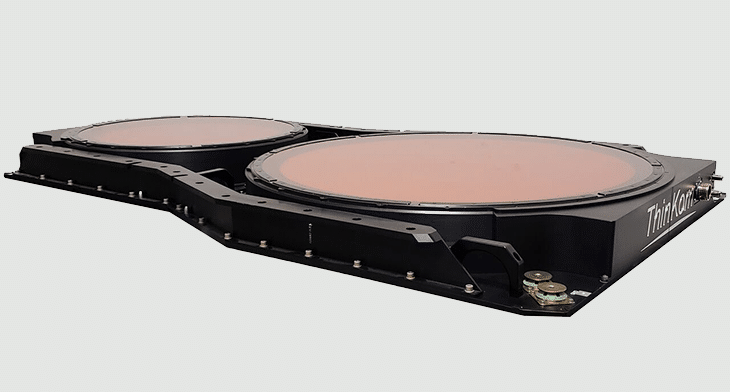 The test was conducted in August 2018 at ThinKom’s facility in Hawthorne, California, in collaboration with SES Networks.

For the ground test, a vehicle-mounted ThinKom Ka2517 aeronautical antenna acquired successive O3b MEO satellites at 13-degree elevation and successfully tracked them for 30-minute periods while the satellites traversed from west to east.

ThinKom said this test is a precursor to a flight test, expected to take place before the end of 2018. This will be the first in-flight demonstration of a ThinKom antenna communicating through a non-geostationary (NGSO) constellation and will demonstrate the ability of ThinKom’s phased-array antenna to auto-track and perform seamless beam switching through aircraft roll, pitch, and yaw motions.

“ThinKom’s unique patented low-profile phased-array antennas have been designed for interoperability on geostationary (GEO) and MEO satellites with the agility and switching speed to move seamlessly from beam-to-beam and constellation-to-constellation. Agility tests have proven that our antenna achieves switching speeds of less than one second, more than fast enough to support beam switching with no interruption in connectivity,” said Bill Milroy, ThinKom CTO.

“The ground test, and the coming aero tests, are important steps in showing the ability of the ThinKom antenna to operate on the O3b MEO satellite network, and will pave the way to full commercialisation,” said Milroy.

“Innovation in terminal technology is key for scaling SES Networks’ proven MEO system for mass connectivity. We’re delighted to collaborate with ThinKom and to continue growing a partner ecosystem that will redefine the standard for our industry,” said Stewart Sanders, executive vice-president of Technology at SES Networks. “This development aligns with our aim to make it faster, easier and more affordable to expand service reach to our customers and their end users.”