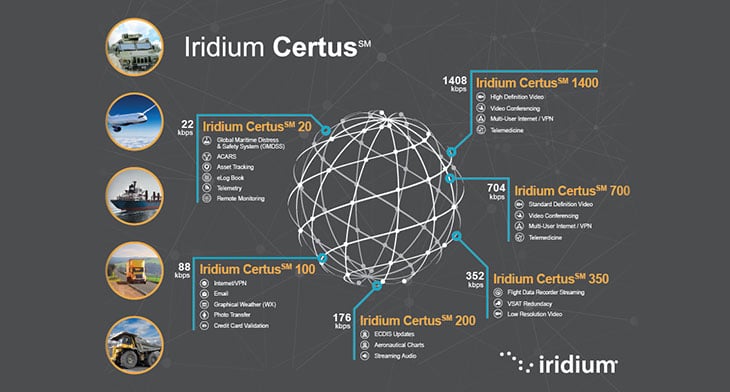 This announcement marks the end of an extensive global testing phase, including beta trials with live customers; the initial service is targeted at maritime and terrestrial applications, with Iridium Certus aviation solutions expected later in 2019, once certified.

“The debut of Iridium Certus is the start of a new chapter in the Iridium story, one that is set to catapult us and our partners forward. At its core, Iridium Certus is an innovation engine for the future,” said Iridium CEO Matt Desch. “Adoption of this new service by our partners has already begun, and it has been eagerly anticipated by every target industry. The launch of this service is a huge achievement, and it is already disrupting the status-quo through our smaller, faster, lighter and more cost-effective terminals and service.”

Upon terminal availability later in 2019, aviation users will gain access to Iridium Certus solutions that support a range of capabilities for aircraft, including business jet cabin connectivity for mobile office functions. Future flight deck applications will help advance efforts toward adopting satcom as a primary means of aircraft communications.

Iridium is debuting the service, which will feature a variety of speed classes, with the Iridium Certus 350 (352/352 Kbps) offering, which supports capabilities like internet and high-quality voice services to compact terminals built specifically for maritime, aviation and terrestrial/vehicle applications.

Terminals will be upgradable to the next speed class, Iridium Certus 700 (352/704 Kbps), with a firmware update once available. Initial activations of the service occurred in December of 2018 with excellent system performance.