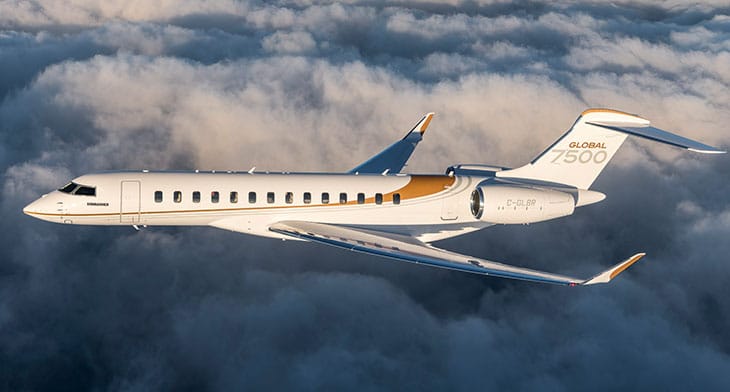 Bombardier has celebrated the entry-into-service of its Global 7500 business jet, with promises to “revolutionise the market” and private aviation landscape.

The milestone was celebrated at an event held in its recently renamed Laurent Beaudoin Completion Centre with Bombardier Business Aircraft president, David Coleal, commenting: “Pride and excitement are profound understatements when it comes to the entry-into-service of our flagship Global 7500 aircraft.”

He added: “This revolutionary aircraft is the gateway to a transformed business aviation landscape and a very bright future.”

The aircraft also exceeded its original takeoff and landing performance commitments, leading to a new published takeoff distance of 5,800 feet – which Bombardier suggests is almost 500 feet shorter than the closest competitor aircraft. The company says this will facilitate access to challenging airports even in adverse weather conditions.

“Today’s celebration is a testament to the rigour and excellence of our Global 7500 aircraft program, from the drawing board to entry-into-service,” said Michel Ouellette, senior vice-president, Programme Management and Engineering, Bombardier Business Aircraft. “It is a historic moment for Bombardier and the thousands of dedicated employees who have proudly brought a no-compromise attitude to the table each and every day. Today, the world-class, highly-skilled team at the Laurent Beaudoin Completion Centre continues to carry on the tradition of delivering game-changing large-cabin aircraft in Montréal, much like the original Global Express 20 years ago.”