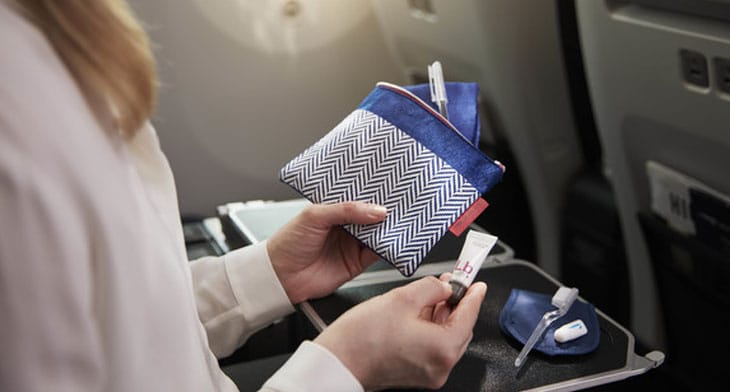 British Airways is introducing a range of new amenities in its premium economy cabin, as part of the next phase of its investment in the World Traveller Plus cabin.

The new amenity kits use materials from recycled plastic bottles and are to be introduced from 1 July, including travel essentials such as an eyeshade, socks, a pen, toothbrush and toothpaste and lip balm from the Scaramouche & Fandango range.

A new quilt and cushion will also be available in a herringbone design, which the airline says is synonymous with the pattern that runs through the airline’s First cabin.

The new amenity kits follow improvements made earlier in the year to the World Traveller Plus cabin including new menus with a focus on seasonal ingredients.

“We’re investing £6.5bn for our customers and these improvements to World Traveller Plus mark part of that investment,” said Carolina Martinoli, British Airways’ director of brand and customer experience. “The new menus that we introduced in World Traveller Plus earlier this year have been a huge hit with customers and this second phase including the new washbags, quilts and cushions will really add to the comfort of the cabin.”

British Airways is also introducing alcoholic and non-alcoholic cocktails to the World Traveller Plus bar menu, including a Gin Fizz or Bloody Mary cocktail, or a Citrus Twist for a non-alcoholic alternative.