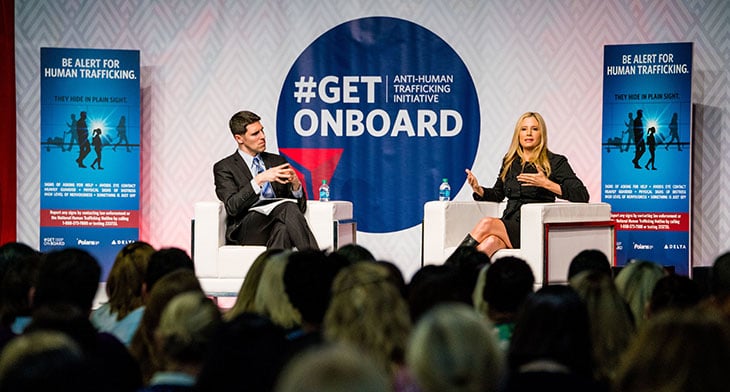 Seventy-one percent of labour trafficking victims report being trafficked into the US on an airplane, prompting the carrier to announce a series of enhancements to raise awareness among travellers in airports and, for the first time, via in-flight
entertainment screens.

“Trafficking is a dark topic – but, in the darkness, there is massive opportunity for 80,000 Delta people, hand-in-hand with our 200 million customers, to drive change and ultimately save lives,” said Allison Ausband, senior vice president — In-Flight Service. “With over 56,000 employees trained to identify trafficking indicators, we are introducing a customer awareness campaign that will unite us all – sending a clear message to traffickers that they are not welcome on our planes or in our airports.”

The campaign, developed with anti-human trafficking experts Polaris includes an in-flight video that puts a face and story to modern slavery, depicting an unsuspected trafficking dynamic and highlighting indicators through the eyes of a young boy – the trafficking victim.

“He’s not really my uncle, that’s just what he told me to say,” the boy whispers, nodding to a common trafficking scenario of a deceptive relationship while the trafficker next to him sleeps. From the Delta entertainment system screen, it heightens customers’ awareness of a scenario potentially transpiring in the row in front of them.

The video is being introduced with a PA announcement on all aircraft equipped with seatback screens during January, Human Trafficking Awareness Month. It also provides the number for the National Human Trafficking Hotline, a resource for victims and the community alike to report tips of human trafficking or access support.

Customers have the chance to join the fight by donating miles through Polaris using Delta’s Skywish program. The miles fly victims home, to safety or to receive critical care and legal services. The program has provided 60 flights for survivors thus far, and Delta is matching the first 3 million miles donated.

“Our commitment is a consistent, dedicated drumbeat until each person is set free: we’re all in and we don’t waver,” said Ausband.