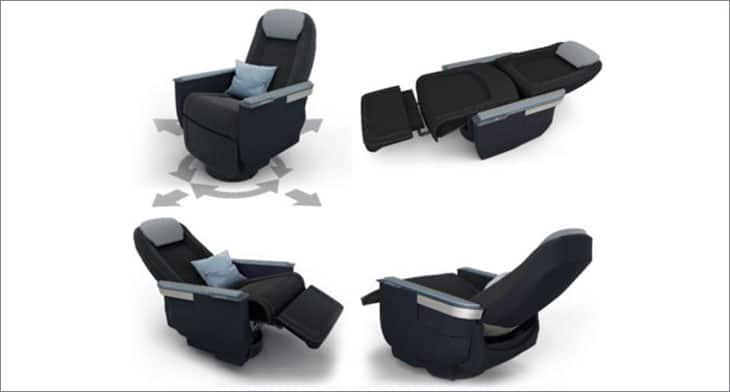 Collins Aerospace Systems has unveiled its next-generation Evolution seat, building upon the success of the first generation with increased living space and comfort.

“Evolution is unmatched in its ability to scale from a business class seat to a super first class seat,” said Ian Webb, vice president of Sales and Marketing for Seating at Collins Aerospace. “This foundation coupled with ease of maintenance and reliability testing makes for one of the highest quality business jet seats on the market.”

Evolution provides greater room inside the cabin due to its unique recline design allowing for close-to-bulkhead installations. Unlike traditional seats that must be floor tracked or seat-base tracked and reclines in two motions, Evolution reclines in one continuous motion.

The seat has a compact pedestal base that allows designers the ability to achieve the appearance of a floating seat and it operates on a proprietary triple roller system for a smooth transition between seat positions with minimal effort. It also has an extended leg rest to accommodate a range of occupant sizes.

Additionally, with a one-touch control, the seat adjusts immediately to the proper takeoff and landing positions, as well as provides a “zero gravity” recline position to reduce pressure points during flight. Its patented headrest, with tilt provides head support for reading and working, and fits flush into the backrest when the seat is in a full-flat position. Articulating armrests on the seat can also be lowered to produce a wider sleeping surface.