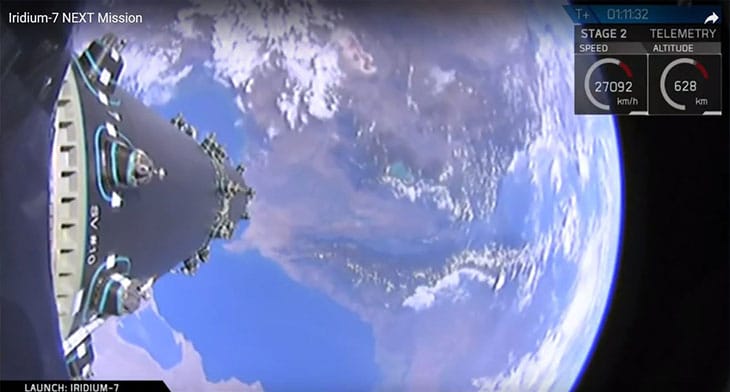 According to the children’s nursery rhyme, Wednesday’s child is full of woe, but there was no sign of despondency this past Wednesday as the skies above became a little more populated.

Lifting off from Vandenberg Air Force Base in California, a SpaceX Falcon 9 rocket successfully launched 10 Iridium NEXT satellites to low-Earth orbit (LEO). This was the seventh of eight launches planned for the Iridium NEXT constellation, replacing the company’s existing 66-satellite network.

Only one more launch of 10 satellites remains until the Iridium NEXT network is completed, ushering in a new era of capabilities, such as the Iridium Certus broadband service and Aireon real-time aircraft surveillance system.

Five companies have been selected by Iridium as Value Added Manufacturers for Iridium Certus, including Cobham, Gogo, L3 Communications, Thales and most recently Rockwell Collins.

“This historic constellation refresh is one launch away from completion,” commented Matt Desch, chief executive officer at Iridium, adding “We’ve come a long way, and we are particularly excited to see the financial transformation enabled by the completion of the Iridium NEXT system and the associated drop in capital expenditures.”

Upon activation of all 10 new satellites, orbital plane five will become the fourth Iridium orbital plane to be comprised exclusively of Iridium NEXT satellites. In total, 81 satellites are being built with 75 planned for launch. Nine of the satellites launched will serve as on-orbit spares, and the remaining six will be ground spares.

A little way further south, four new Galileo satellites were successfully launched from the European spaceport in Kourou, French Guiana, bringing the constellation to a total of 26 satellites.

“Today is an excellent opportunity to celebrate what Europe can achieve when resources, competences and commitments are brought together,” GSA executive director Carlo des Dorides said immediately after the launch. “Yet the success of Galileo is not measured by the number of satellites, but by the number of users, and here too we have achieved remarkable results. In the past 18 months, Galileo has moved from zero to 400 million users,” he added.

Elzbieta Bienkowska, European Commissioner for Internal Market, Industry, Entrepreneurship and SMEs, called Galileo “a unique European achievement” and said that the latest launch would give both Galileo and the EU full worldwide coverage.

“It is now up to us – the GSA, and all our partners, to lead this revolution by working together across institutions and disciplines to overcome challenges and bring space closer to Earth, ” added des Dorides. “Because, we have proven once again that the sky is not the limit.”