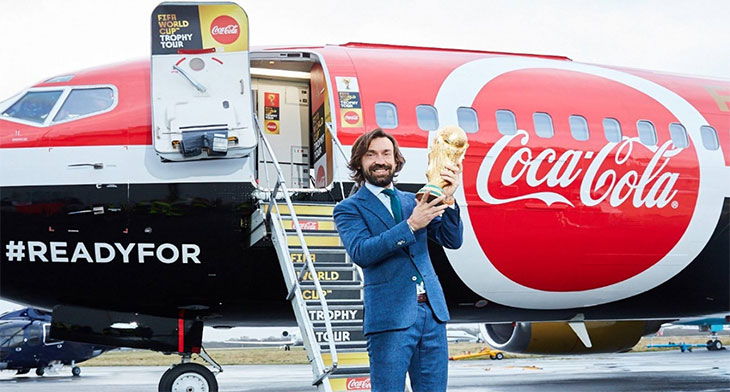 There’s been a happy marriage of social media posts for avgeeks and football fans over the past couple of days, as 31 national squads touched down across Russia for the 21st FIFA World Cup.

Held in 11 cities, from Kaliningrad in the west to Ekaterinburg in the east, being hosted in the largest country on earth will involve all players racking up the air miles. At one end of the spectrum is Colombia who travel a miserly 761 miles, while Egypt will travel a whopping 5,288 during their group stage matches.

With the news that the 2026 World Cup will be jointly held in the US, Mexico and Canada, it will come as some relief to players and fans alike that, should they need to attend the tournament they can do so in comfort while being connected – at least for the 10 games held across Canada.

As the BBC points out, the distance between the most northern host city (Edmonton) and the most southern (Mexico City) is almost 3,000 miles, which compares to 1,900 miles at this month’s tournament in Russia.

So it’s welcome news that WestJet is fitting out 20 of its aircraft with a mixture of Recaro seating across long-haul and short/medium-haul routes.

As of this year, the German-based seat manufacture will deliver its CL3710 seats for the carrier’s Boeing 787 Dreamliner while kitting out its 737 MAX with BL3250 economy seats and CL4710 business-class seats, respectively.

Elsewhere, Air Canada, in association with Gogo, has launched Air Canada Wi-Fi becoming the first Canadian carrier to offer customers the ability to stream TV and movies in-flight through the internet.

According to Benjamin Smith, president, Passenger Airlines, at Air Canada, the service is an “excellent productivity tool for business travellers,” who “can stay up-to-date and arrive fully prepared for any meeting or event.” Or manage their World Cup fantasy football team.

As they say in Russia ‘Nu i gol! Otlitchny gol!’