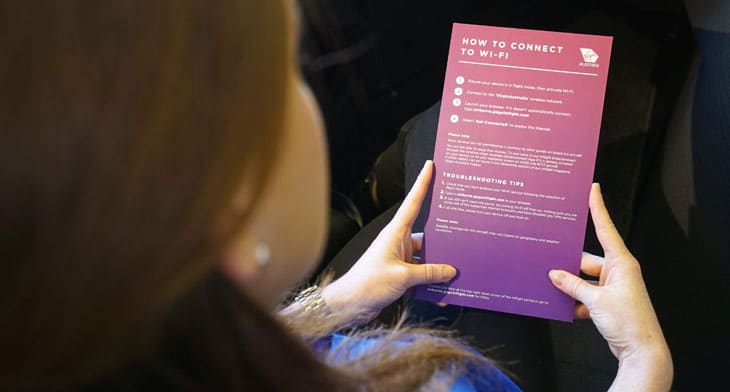 With editor Alexander Preston overseas at San Diego’s GCA Summit, Inflight’s Kimberley Levey steps in to offer her take on the latest happenings across IFEC and cabin technology.

Many internet savvy people will recognise the Fear of Missing Out (or FOMO), described by the Oxford English Dictionary as: “Anxiety that an exciting or interesting event may currently be happening elsewhere, often aroused by posts seen on social media.”

Added to the dictionary in 2013, FOMO has become more commonly known as the desire to stay connected at all times.

Now research commissioned by Virgin Australia has revealed that 70% of Aussies confessed to having experienced ‘net-lag’ during a flight – referring to feelings of stress and FOMO caused by the inability to stay connected on flights.

Rob Sharp, group executive for Virgin Australia Airlines, said: “Most of us use our phones on a daily – if not hourly basis – meaning it can be incredibly disruptive to have extended periods of time when you can’t connect with friends, family, colleagues, or what’s going on in the world.”

The airline announced this week that after a successful testing period, its international in-flight Wi-Fi will be officially live with passengers travelling between Australia and Los Angeles, enabling them to remain connected to their family, friends, favourite TV shows or the news during their flight.

The airline believes the introduction of in-flight Wi-Fi may alleviate these feelings of ‘Net-Lag’ for passengers.

Meanwhile, leisure carrier SunExpress, a joint venture of Lufthansa and Turkish Airlines, is also enhancing its passenger experience and has partnered with Immfly to introduce a new in-flight entertainment system – SunExpress Entertainment – on its fleet of Boeing 737-800NG and MAX aircraft.

Passengers will be able to enjoy a range of content, from TV shows and films, to music, games, magazines and children’s content, by using their own personal electronic devices to enter the Immfly Wi-Fi network on board.

The platform will also offer a ‘Your Destination’ section providing tips for passengers of where to go and what to do in their destination city, as well as guides offering information on transfer services and tours, covering the airline’s routes and in several languages.

Along with an interactive 3D route-map and flight information, the airline’s catering and duty-free menus will also be available on the digital platform. The airline plans to enhance this channel by allowing the passenger to select and pay from the platform in a ‘self-service’ style.