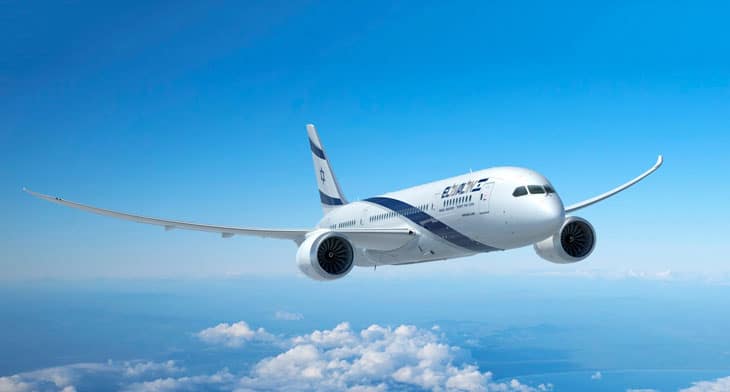 EL AL Israel Airlines has officially launched its new in-flight Wi-Fi service, powered by Viasat, holding an ‘Inaugural high-speed Wi-Fi service flight’ which flew from Tel Aviv to Paris on one of its new Dreamliner aircraft.

On the flight, EL AL says 128 devices were connected, many streaming movies, videos, music and the World Cup semi-final. More than half of the passengers were filming and streaming videos, some with Facebook Live, while others were posting videos and pictures of their journey to social media.

“Israeli passengers want to keep up-to-date and connected in real-time even when in the air,” said Nimrod Borovitz, director, strategy and business development at EL AL Israel Airlines. “We invested in the most advanced in-flight Wi-Fi product from Viasat so that we could best respond to our customers’ interests, from surfing sites, connecting to emails, using apps, viewing social-media networks, listening to music and streaming movies and live sports during flights.”

When flying on transatlantic routes, the system will connect to the ViaSat-2 satellite, which provides an internet connection from across North America and the Atlantic Ocean to Europe. On European flights the Viasat service will connect to the KA-SAT satellite through its European joint venture with Eutelsat.

EL AL will offer three internet service packages: Basic, Social and Business. Packages will begin with Basic, where passengers can use their smartphones and tablets for instant messaging applications, emails and to browse EL AL’s free sites. The package is free during the launch period.

The Social package builds on the Basic plan, but also allows passengers free site browsing and the ability to view short videos of up to three minutes. The package costs $9.99 per passenger per flight, with discounted rates for Matmid Frequent Flyers and FLYCARD holders.

The Business plan goes further, also allowing users to stream movies, music and more as well as VPN access. The package costs $19.99 per passenger per flight, with discounted rates for Matmid Frequent Flyers and FLYCARD holders.

During the introductory trial period for international flights from Europe to North America, EL AL will offer the service free until the fourth quarter of 2018.

Currently, 15 EL AL aircraft have been outfitted with Viasat’s latest equipment, providing high-speed connectivity to EL AL’s fleet of Boeing 787 Dreamliners, Boeing 737-900 and Boeing 737-800 aircraft. The airline expects to have the majority of its fleet connected with the Viasat service by mid-2020.

If you have any feedback about this article or would like to suggest a topic for future investigation, please contact us.