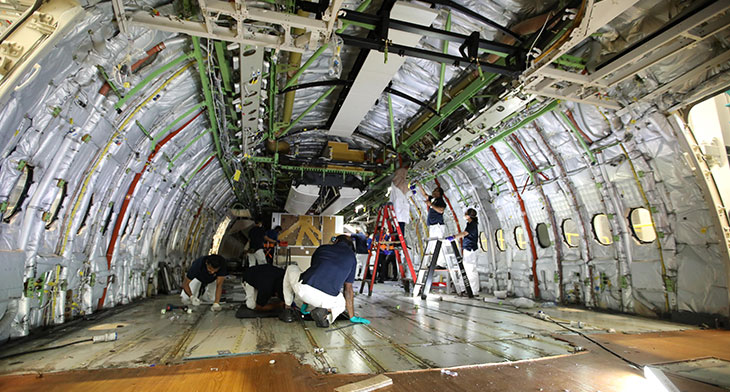 The reconfiguration of the second Boeing 777-200LR aircraft in the Emirates fleet has been completed in-house by its engineering arm.

Emirates Engineering converted the aircraft from three to two cabin classes. Business class features a new social area and wider seats in a 2-2-2 format. Economy class has also been refreshed.

In total, the team had to work with over 30 suppliers and had to manage more than 2,700 parts and spares at any one point of time. Key suppliers such as Boeing, Jamco, Panasonic, Rockwell Collins, Zodiac, and ATG were present on-site to provide assistance.

During grounding, the original interiors of the aircraft cabin were completely stripped and rebuilt. The reconfiguration not only involved the installation of new seats but also a number of other changes including new wiring for the lighting systems, raising the ceiling height in the business class cabin, and modifying the aircraft galleys to incorporate the new social space in business class.

It took Emirates Engineering 55 days of ground time to reconfigure the first aircraft. However, as a result of the experience and efficiencies achieved during the first conversion, the reconfiguration of the second aircraft was completed in just 35 days.

If you have any feedback about this article or would like to suggest a topic for future investigation, please contact us.