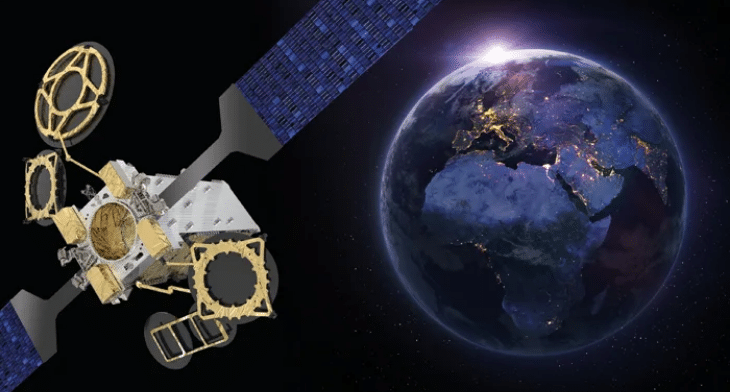 Eutelsat Communications has signed a letter of agreement with Thales Alenia Space for the procurement of EUTELSAT 10B, a new all-electric satellite built on the Spacebus NEO platform.

Scheduled to be launched in 2022, EUTELSAT 10B will carry two multi-beam HTS Ku-band payloads: a high-capacity payload, covering the North Atlantic corridor, Europe, the Mediterranean basin and the Middle East, offering significant throughput in the busiest air and sea traffic zones, and a second payload to extend coverage across the Atlantic Ocean, Africa and the Indian Ocean. The satellite’s HTS payloads will be able to process more than 50 GHz of bandwidth, offering a throughput of approximately 35 Gbps. The entire satellite payload will be digitally processed, offering capacity allocation flexibility thanks to a digital transparent processor.

This includes Gogo, whose president and CEO, Oakleigh Thorne commented: “We are advancing capacity capabilities given the growing demand for high-speed inflight connectivity services

Rodolphe Belmer, CEO of Eutelsat, said: “The procurement of EUTELSAT 10B underpins our strategy of focusing our development in the field of connectivity. The selection of its Ku-band payload, in complement to the future KONNECT VHTS operating in Ka-band, reflects our ability to serve our customers in both Ka- and Ku-band with best-in-class space assets. Firm capacity commitments secured with major partners testify to both the quality of coverage at our 10° East location as well as the robustness of demand in the mobile connectivity segment.”