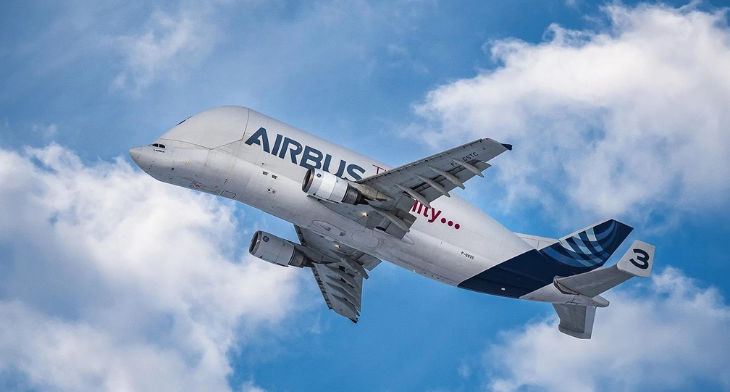 To launch the new service, Beluga “No 3” delivered a brand new helicopter from Airbus Helicopters’ manufacturing site in Marignane, France, to Kobe in Japan in late December 2021, stopping to refuel at various transit points.

Airbus says the whole helicopter was accommodated inside the Beluga without any prior disassembly and only needed its long rotor blades to be folded back.

The fleet of BelugaSTs, which has been used to transport Airbus’s large aircraft sections, still has plenty of available flight hours remaining before the aircraft will reach their original design service limits.

The Beluga possesses the world’s largest interior cross-section of any transport aircraft and can accommodate outsized cargo of up to 7.1m in width by 6.7m in height. The new service will be solely dedicated to carrying cargo for commercially contracted customers such as engine manufacturers, space industries, helicopter manufacturers, oil and gas firms, energy providers and machinery manufacturers.

Clement Beaunis, Project Leader of Airbus Beluga Transport, said: “The large dimensions accommodated are also attractive for satellite manufacturers, for example, as they would like to design bigger ones in the future. In contrast, today they are constrained in size by the available transport means. The Beluga will relieve that constraint.”

Airbus says its six new-generation BelugaXLs, which are based on the aircraft manufacturer’s A330-200 platform, will support its ramp-up of airliner production going forward.

Airbus says its in-house airline Air Transport International (ATI) is using its own aircrew for the initial Beluga missions, but once Airbus has commissioned all six new BelugaXLs the fully released BelugaST fleet will be handed over to a newly created dedicated subsidiary airline.

The airline will have its own Air Operator Certificate and employees and the Belugas will be upgraded with a new generation Flight Management System (FMS) with ADS-B for enhanced intercontinental navigational capabilities.

According to the aircraft manufacturer, an automated on-board cargo loader, available from 2022, will enable missions to and from airports which do not have available suitable loading/unloading platforms, and for payloads weighing up to 20t. It will also be able to load and unload the payload autonomously and will be transportable inside the aircraft.

Other innovations will include a redesigned transportable outboard platform which will be strategically pre-positioned at various airports around the world and is easily transportable prior to a mission at short notice, and a new multi-purpose pallet which is compatible with a range of payloads and is raised by around five metres above the apron level when it is already carrying the cargo and loaded through the Beluga’s nose opening.