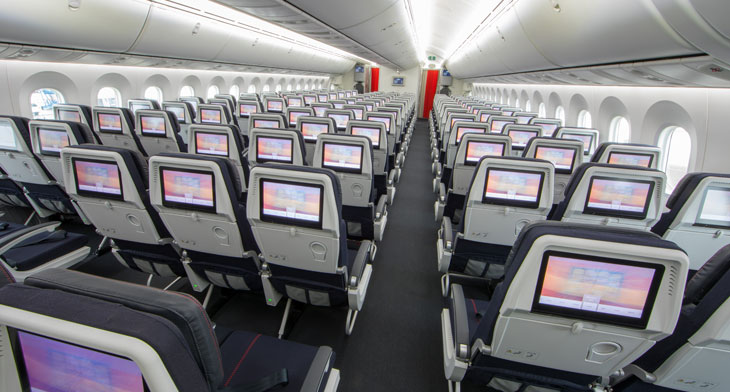 Marks admitted that its Aviation Connectivity revenue and margins were lower than expected, but proffered that, “We have a clear path to recovery as airlines install the chipsets they have now purchased and received in the coming months.”

The company forecasts at least 150 new aircraft installations for the full year of 2019, “with a potential for significantly more based on aircraft availability and our current backlog.” These aircraft will be installed sequentially throughout the year.

“In Aviation Content,” Marks explained, “in the fourth quarter, we ended a contract with the Middle Eastern airline a quarter earlier than expected and stopped accruing revenue for a customer that is in the process of a restructuring. Our four new major contracts all started in January.”

Said Marks: “On Air France, we offer more than 300 movies and TV episodes onboard each aircraft, updated touch-free via our satellite network. Our Air France portal has advanced digital rights management and complies with stringent European net neutrality regulations. Thus far, the response from Air France passengers has been terrific. On flights with free service, we’re seeing 100-plus active connected devices. We’ll be launching new packages designed for streaming shortly. Air France had wanted to wait until a critical massive aircraft were online. And importantly, we are seeing strong performance across our network. We have the broad regulatory approvals, and we’re not dependent on narrow beams in Europe with major service gaps of our competitors. So we are confident that Air France’s solution is best-in-class.”

Another customer is Southwest, with which was launched a new captive portal enhancement that proactively invites Wi-Fi connected devices to access movies, TV and internet. “Overnight, we saw a 40% jump in devices accessing our portal, with most devices choosing our TV, movies and audio services,” said Marks. “We plan to launch Apple Pay in coming months, so passengers with Apple devices can use biometrics to purchase Wi-Fi access. And we’ll be launching Wi-Fi and TV to support Southwest’s new Hawaii routes.”

At Norwegian Air Shuttle in the fourth quarter, Global Eagle launched premium paid services alongside the existing free services. “Again, we utilised our proprietary NRM technology to efficiently operate three service tiers: a free tier, a social media tier and a streaming-class tier. Of the passengers who elect to upgrade to a higher tier: about 40% to social media and 60% to streaming; that’s more streaming than we thought. So we now expect a 10% increase in our [indiscernible] net of our rev share. Through NRM, we’ve been able to manage streaming-class services using existing bandwidth. So this will contribute to our in-flight connectivity margin recovery. We’ll also bring these capabilities to LOT Polish Airlines, as we launch with them soon, further increasing the utilisation of our European network.”

Speaking to analysts, Marks explained that the company had developed complementary technologies that are driving commercial momentum today, but they have yet to be fully exploited, including 3-axis aviation antenna now in commercial service with Air France.

NRM is driving new revenue in aviation, by optimising how data flows over Global Eagle’s network, routing traffic by cost, latency and application profile, and therefore, allowing the company to efficiently deliver entertainment over it connectivity pipes, while maintaining system performance under high demand.

The introduction of a next-generation guest portal is driving high take rates, making entertainment and connectivity simpler to find, to buy and to consume. “With full integration with both NRM and our Connectivity platform, we provide touch-free portal updates, and we can prioritise traffic efficiently for premium service models,” said Marks.

Marks said that the company is launching commercial operations of its new digital content supply chain, which is already processing thousands of media files per month. “We recognised that our content processing infrastructure had to keep pace with new media, passenger preferences and seat-back capabilities.”

“The new infrastructure helps us operate more efficiently, simplifying our content service workflow and our editing for faster delivery to customers. It also simplifies our back office from licensing, to programming and invoicing, so that we could be more efficient and targeted in our procurements. This is very important to achieving our 30% gross margin targets for Media & Content.”

It also means the company can move beyond monthly content cycles.

“We’re in the first phase of deployment, and we expect to move airlines across onto this new platform starting this year,” stated Marks who added: “As a reminder, we focus on Boeing 737s and A320s for in-flight connectivity. We do that because they carry multiple passenger loads each day. They generally don’t have seat-back systems, so they are right for connected entertainment. They generate advertising and sponsorship, and they drive efficient use of satellite capacity. So we’re in the later stages of several procurement processes with airlines now, and I do note that we’re seeing rational competition with limited giveaways.”

Marks also revealed that in 2018, Global Eagle spent approximately US$200 million on content. “Now as we capture new accounts and we build scales, our digital content supply chain technology helps us analyse and buy content more efficiently. In our Connectivity segment, last year, we spent over $100 million on bandwidth to support Aviation, Maritime, enterprise and government contracts. The majority of our bandwidth service orders will expire in coming years. As these contracts reset to market and reflect our purchasing scale, we have real opportunities to both reduce spend and set win-win partnerships with satellite operators.”