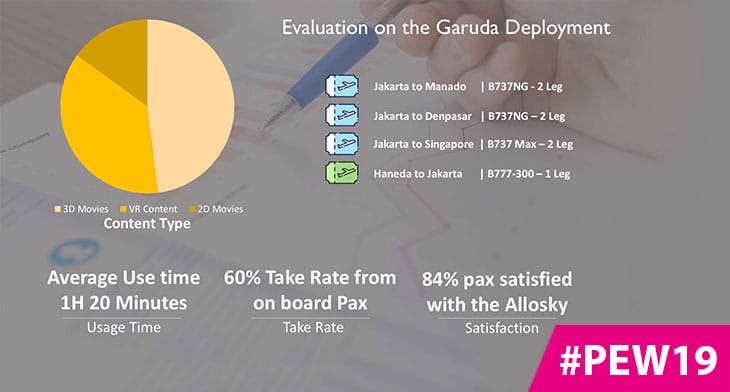 SkyLights, in collaboration with MRO provider GMF AeroAsia, has deployed a new easy-to-implement cabin announcement integration for its AlloSky VR entertainment for Garuda Indonesia on international flights between Indonesia and Japan.

With the new integration, the AlloSky cinematic VR headset is simply plugged into the seat, allowing automatic detection of cabin announcements to pause playback while in progress.

Garuda Indonesia became the first Asia-Pacific airline to offer SkyLights’ AlloSky onboard in January, when it introduced the service in business class on a selection of domestic routes. Having now validated the new cabin announcement solution with the Directorate General of Civil Aviation (DGCA), Garuda Indonesia has made the service available on international flights between Jakarta, Indonesia and Haneda, Japan. The first of these flights took place on 28 March.

“We are always looking at new and innovative ways to engage with our passengers, and virtual reality is the latest way we are using a rapidly evolving area of technology to further improve the in-flight service experience,” said Ari Askhara, Garuda Indonesia’s CEO.

In order to introduce the service on international flights, SkyLights and Garuda’s MRO subsidiary GMF AeroAsia worked in close collaboration to develop the new cabin announcement integration to meet the regulatory requirements set out by the DGCA. The new system can be implemented immediately without integration into the cabin system or the need of a local network.

“Through this safety integration our Allosky cinematic VR entertainment becomes even more accessible to airlines seeking to upgrade and differentiate their premium customer experience. Implementing VR onboard works on a case-by-case basis and we are delighted to now be able to offer greater choice and flexibility when deploying our solution. Having it developed, validated and deployed in such a short period of time is a true testament to GMF AeroAsia and Garuda’s ability to innovate,” said David Dicko, SkyLights’ CEO.