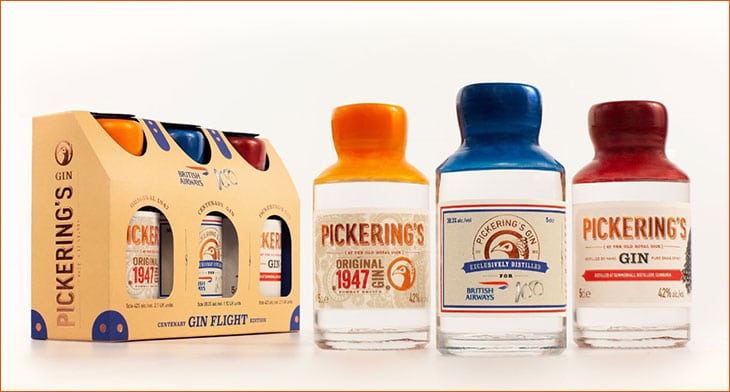 Edinburgh-based Pickering’s Gin has created a gin specifically developed to be enjoyed at altitude for British Airway’s centenary celebrations.

British Airways has partnered with British brands to create a series of ‘Centenary editions’ for its milestone year. So Pickering’s Gin has created Pickering’s British Airways Centenary Gin – available to drink onboard on all the airline’s short-haul flights and purchase through the High Life shop as part of a trio pack. 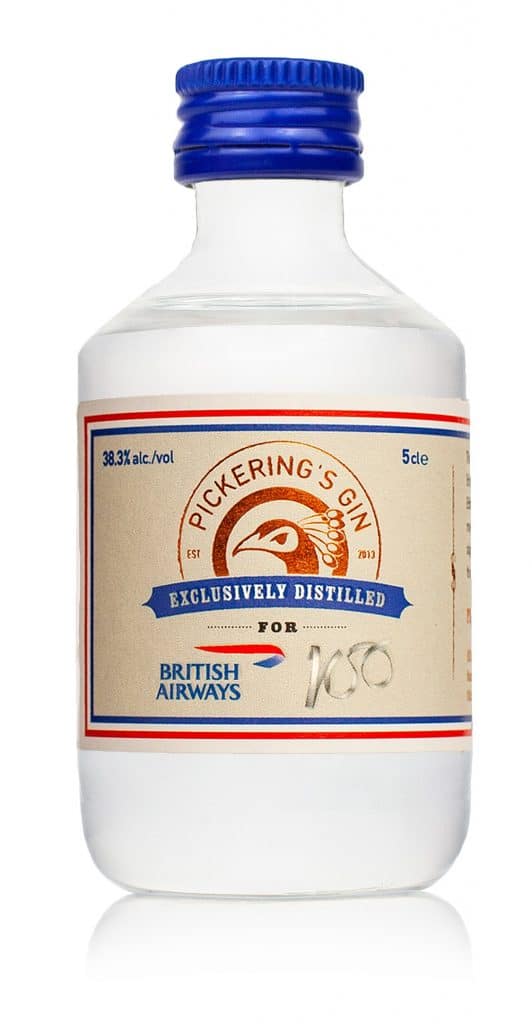 Distilled at Edinburgh’s Summerhall Distillery, the 10-botanical gin celebrates the best of British flora and fauna – juniper, rose petals and heather – alongside signature Pickering’s botanicals of lime, lemon, cardamom and cinnamon. Pickering’s Gin explained the resulting spirit is the product of close collaboration to ensure the flavour is maximised in the air, but also tastes just as good on the ground.

Professor Charles Spence from Oxford University’s Crossmodal Research Laboratory, one of the world’s leading flavour scientists, explained the science behind taste in-flight: “At 30,000 feet, low air pressure and lack of humidity suppress our taste receptors and alter our sense of smell. Our perception of sweet and salt are somewhat muted whereas our ability to identify spices and bitter flavours are seemingly left unchanged. Surprisingly, our ears play a part in how we perceive taste too. Background noise such as the hum of the engines can render many people unable to detect salty or sugary flavours effectively.”

To work around the impact of flying on taste, head distiller and co-founder Matt Gammell said: “To banish so-called airplane ‘taste blindness’, we have carefully designed a botanical flavour profile that enhances what you lack when you’re soaring in the sky.

He added: “As a distiller, developing a gin on the ground and then trialling it in the sky at different altitudes was a fascinating process. We trialled multiple iterations of the recipe in the air until we were confident that it would taste as good in the sky as it did on the ground.”

Central to the Pickering’s British Airways Centenary Gin’s flavour profile is the addition of lemon myrtle, which in contrast to other classic acidic citrus fruits, provides a natural sweetness alongside the citrus flavour. The company explains that this adds “a fresh taste” without a bitter edge, balancing with the sweetness of heather and rose “to deliver an enhanced sweetness and depth of flavour that is missing in many commercial gins when consumed at altitude.”

The special gin is available to drink on board all economy flights under four hours from 1 May and it will be offered (with a Schweppes 1783, slice of lemon and ice) as BA’s premium G&T serve on board for the remainder of their Centenary.

Marcus Pickering, Co-Founder and head of export, commented: “Given our drive to take Pickering’s Gin into new markets, we are absolutely delighted to be working with an airline that gets us there – British Airways. It is an absolute dream to partner with such iconic brand.”

Passengers will also be able to buy the Centenary Gin as part of a limited-edition triple ‘Gin Flight’ miniature gift pack, sold onboard on all long-haul and non-EU flights through the High Life shop.