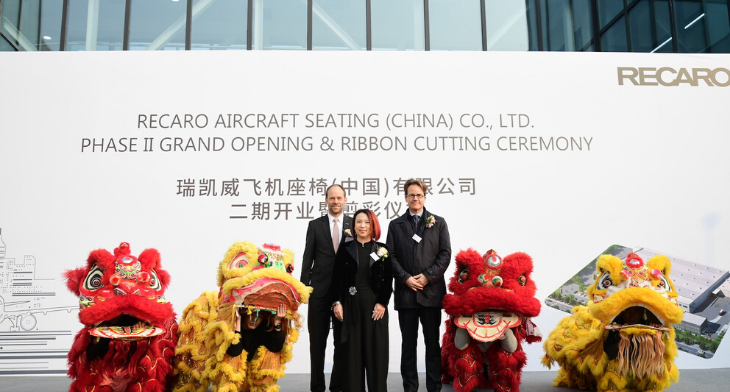 Recaro Aircraft Seating has inaugurated its newly expanded production facility in Qingdao, concluding the second phase of the space2grow initiative.

The new Recaro production facilities measures roughly 7,500 square meters and is provisioned to accommodate up to five new assembly lines which will increase the maximum production capacity of Recaro’s China plant to 60,000 seats per year.

“The new building reflects a clear commitment by Recaro Aircraft Seating to the Chinese market,” said Martin Putsch CEO of the Recaro Holding, at the inauguration.

“Recaro Aircraft Seating has been manufacturing very successfully in Qingdao,” said Irene Tan, general manager of Recaro Aircraft Seating in Asia Pacific. “Customer feedback has been exceedingly positive, in terms of the quality of seats and our ability to meet delivery deadlines with 100% on-time performance so far. As a result, production volume has increased so much that the site rapidly reached its limits in terms of space. With the new facility in place, we now have the floor to grow even more and service our customers in the region even better for 2020 and beyond.”