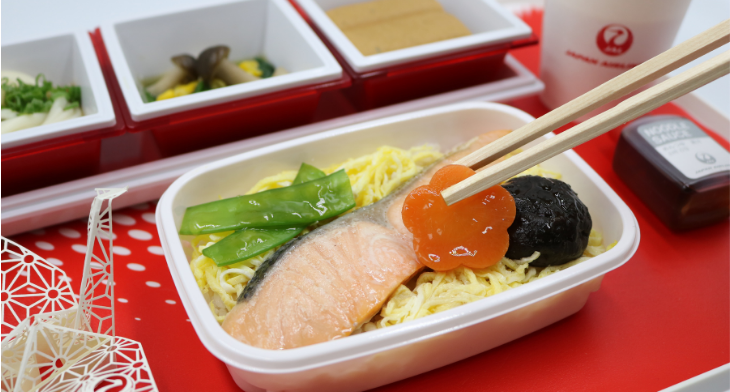 In a collaborative first, JAPAN RAIL CAFÉ, a travel-themed cafe operated by the East Japan Railway Company, and Japan Airlines (JAL) are giving diners a limited one-month opportunity to enjoy a selection of in-flight meals in the café, and opportunity to purchase exclusive JAL merchandise.

Kentaro Dobashi, Vice President and Regional Manager of Japan Airlines Singapore said: “This partnership represents the timeless synergy between two industries—air and rail—that is so instrumental to a memorable travel experience in Japan. We are delighted that our friends in Singapore will be able to relive happy moments—whether it is the anticipation of arrival while enjoying a meal onboard or purchasing a memento of your journey—through dining at JAPAN RAIL CAFE.”

Prepared by SATS, Japan Airlines’ in-flight caterer in Singapore, the meals are strictly limited in quantity, with only 600 meals available during the month-long promotion. Served on JAL trays and compartmentalised into two appetisers, a main and dessert, these two menu varieties were specifically chosen for their popularity among passengers.

Both choices come with Zaru Udon—chilled udon noodles served with wasabi and soba dipping sauce, Kobachi—a ‘small bowl’ or side dish of spinach, corn and shimeji mushrooms in a savoury broth, as well as JAL Signature Earl Grey Chiffon Cake.

For every in-flight meal ordered, customers, who must be a Singapore citizen or Singapore permanent resident, get a chance to enter the grand lucky draw and win one of two JR East passes.

In addition, Japan Airlines’ Singapore-based cabin crew will be at JAPAN RAIL CAFE every Saturday and Sunday of January starting from 9 January, from 12pm to 6pm, to teach interested customers the art of wrapping gifts with furoshiki, as well as folding origami paper planes and cranes.

Customers who order the in-flight meal are also entitled to airfare discounts of up to 28%, valid or travel until 31 March 2022.