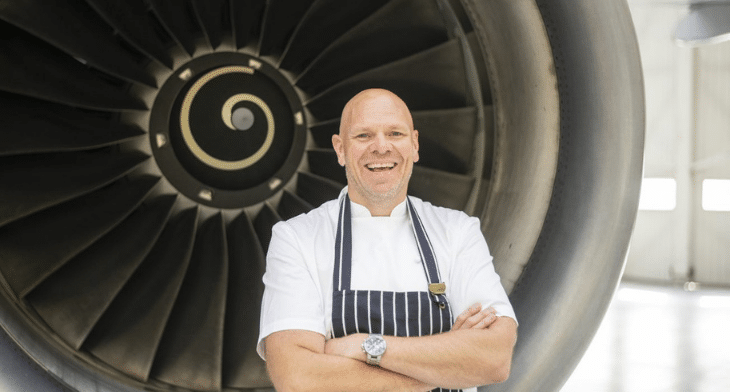 As part of its focus on the short-haul experience, British Airways is partnering with British chef, Tom Kerridge for its new Speedbird Café menu in Euro Traveller.

British Airways will continue to offer complimentary refreshment, comprising a bottle of water and a snack, such as a breakfast bar or crisps introduced in response to the pandemic, alongside its new Speedbird Café pre-purchase menu, hosted on its in-flight retail site www.highlifeshop.com.

Speedbird Café will launch as a pre-order proposition, which will allow customers to customise their journey by purchasing food, drink and in-flight retail items up to 12 hours before departure. It also helps the airline in its efforts to reduce onboard waste as part of its commitment to net zero emissions by 2050.

The airline will also be introducing another BrewDog IPA, exclusively available for British Airways’ customers. The Scottish craft brewery has developed another exciting blend for the airline called JetSteam, following on from the limited edition Speedbird 100.

Elsewhere, the airline will also be moving to the next phase of its on-board catering experience in Club Europe and on all long-haul flights from 20 January 2021, following the temporary introduction of minimum-contact meal boxes to keep customers safe during the Covid-19 pandemic. The airline’s culinary teams have been working with caterers, DO&CO, to develop new menus in its Club Europe and all other long-haul cabins, as well as adapting the meal service to reintroduce china and glassware.