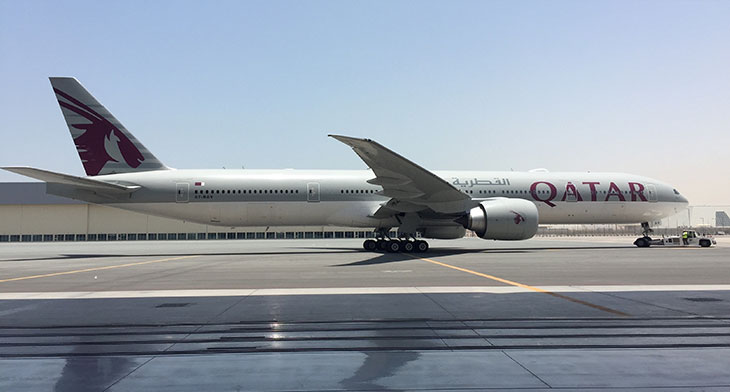 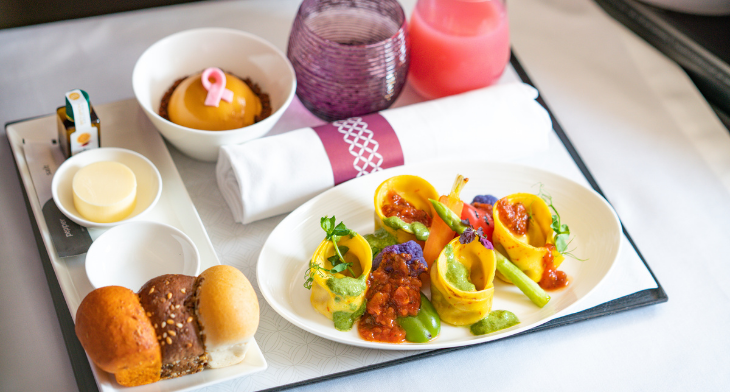 Qatar Airways has introduced its first range of fully vegan dishes to its à la carte menu for business class passengers on all flights.

Qatar Airways Group Chief Executive, Akbar Al Baker said: “We always strive to provide our customers with authentic and indulgent experiences in the skies. We are delighted to incorporate a vegan main course choice to our on-board menu, offering our passengers yet another lifestyle choice that redefines the expectations from a five-star airline.”

The meals are available to all business class passengers flying from the airline’s Doha hub, Hamad International Airport, and selected flights into Doha. 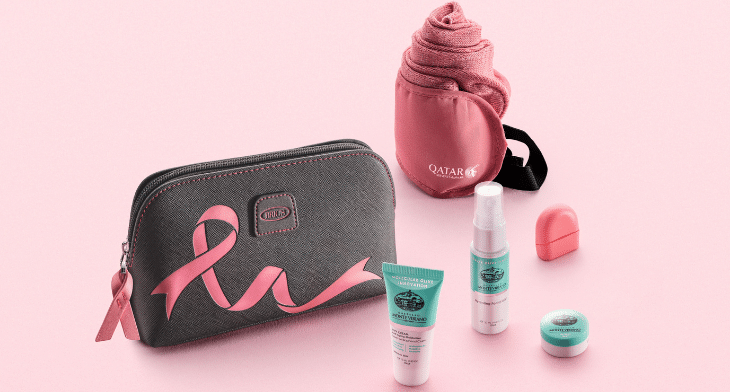 The exclusive amenity kits designed in-house and created exclusively for Qatar Airways by Italian luggage brand BRIC’S, are made from vegan leather with male and female options available. Both kits feature a unique zipper pull in the shape of the iconic breast cancer ribbon.

On flights departing from Doha, passengers travelling in Business Class will be given exclusive pink-themed food and beverage including pink guava and grape lemonade and assorted desserts with the iconic pink ribbon. On all ultra-long-haul flights departing from Doha, passengers will be served a special pink afternoon tea menu featuring raspberry macaroons and opera cake.

Economy Class passengers travelling on overnight long-haul and all ultra-long-haul flights are also offered limited edition breast cancer awareness amenity kits. The bags feature the pink ribbon and include eyeshades, socks, earplugs, lip balm, toothbrush and toothpaste. Pink raspberry or strawberry mousse desserts will be served on all lunch and dinner services on all flights departing from Doha. 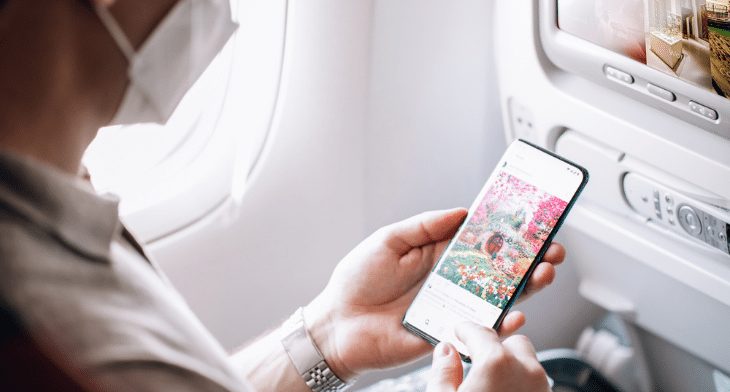 Qatar Airways has launched its ‘Super Wi-Fi’ service on its 100th aircraft, becoming the largest operator of aircraft equipped with the GX Aviation technology from Inmarsat on board in Asia, the Middle East and North Africa.

The service is being rolled out across the airline’s fleet of Boeing 777 and Airbus A350 aircraft. The service has been used by millions of the airline’s passengers since 2018, when it became GX Aviation’s launch customer in the Middle East and North Africa (MENA) region.

Qatar Airways passengers on flights fitted with GX Aviation can receive up to one-hour free access to the Super Wi-Fi service, with the ability to purchase full-flight access if more online time is needed. To honour the loyalty of its valued Privilege Club members, Qatar Airways is offering them up to two complimentary Super Wi-Fi vouchers when they book online between 9 September and 1 October 2020. Other passengers can take advantage of this exclusive offer by signing up to Privilege Club using the enrollment code SUPERWIFI. Terms and conditions apply.

Qatar Airways Group Chief Executive, Akbar Al Baker, said: “As a leader of innovation within the global aviation industry, Qatar Airways already operates one of the youngest and most technologically-advanced fleet in the skies. Where other airlines are reducing their Wi-Fi offering, Qatar Airways is expanding it.

“With connection to our loved ones and friends now more important than ever during these challenging times, we are delighted to work with Inmarsat and its GX Aviation technology to bring high-speed Super Wi-Fi broadband to passengers on board our fleet as part of Qatar Airways’ exceptional five-star service. We are also pleased to extend full-flight Super Wi-Fi connectivity to our loyal Privilege Club members across the globe.” 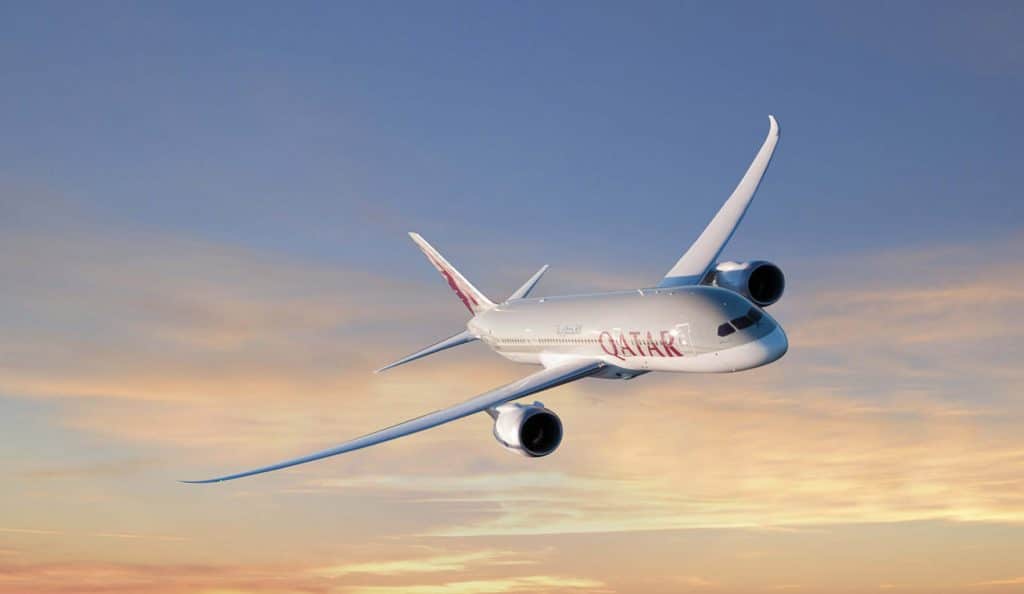 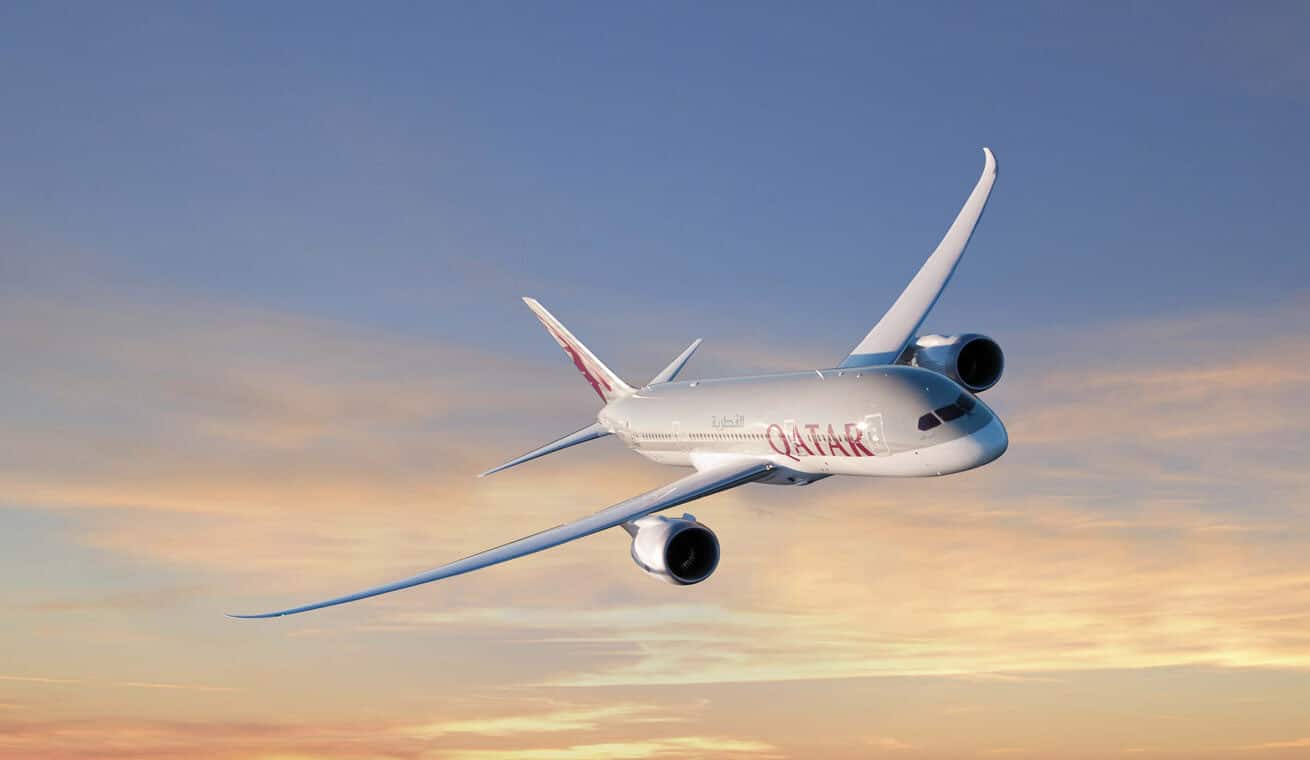 The Performing Right Society (PRS) has won its claim to bring a copyright infringement case against Qatar Airways before the English courts.

PRS for Music is seeking damages from Qatar Airways for the unclicensed use of music owned by its members. It claims that the airline has never remunerated PRS members, songwriters, composers, and music publishers, for the use of their intellectual property.

In a statement, PRS said that, “With no equivalent representative collective management organisation situated in Qatar, Qatar Airways has for decades evaded licensing the performing right in copyrights used in its in-flight services.“

PRS for Music started these legal proceedings against Qatar Airways prior to the Covid-19 pandemic with a focus on the long-standing past infringement of its members’ rights by the airline, and it now seeks to ensure that Qatar Airways and other unlicensed airlines will be set up with necessary licences once air travel resumes after the pandemic.

Subject to any appeal, the case will now proceed to a trial on liability unless Qatar Airways takes the necessary licence to cover the use of PRS repertoire, both retrospectively and moving forwards.

Sami Valkonen, Chief International and Legal Officer, PRS for Music, said: “Over the years, Gulf-based airlines have spent more than a billion Pounds on various sports endorsements, yet refuse to remunerate our members for the use of their music on the airlines’ award-winning in-flight services. Today’s ruling is an important first step in our unyielding quest to correct this long-standing injustice and ensure fair compensation for our members from these airlines. We hope to resolve this matter as efficiently as possible on behalf of our members.” 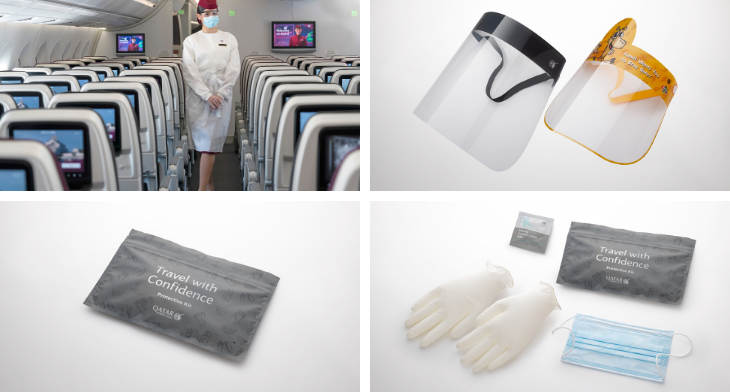 Qatar Airways has introduced new personal protective equipment (PPE) for customers and cabin crew, including face shields and protective kits to all passengers, and a new protective gown for cabin crew.

The disposable face shield is available in two standard sizes – one for adults and one for children. The children’s face shields feature the airline’s Oryx Kids Club mascots as part of their design. Passengers travelling from Hamad International Airport (HIA) will receive their face shields at the check-in counters, whereas at other destinations, the face shields will be distributed at the boarding gates.

Children under two years of age are not advised to wear face shields and face masks or coverings. During boarding and disembarkation, all passengers will be required to wear their face mask or covering as well as the face shield.

Qatar Airways has also introduced new disposable protective gowns for cabin crew that are fitted over their uniforms, in addition to safety glasses, gloves and a mask. The new branded gowns are personalised with Qatar Airways’ logo imprinted on the top left corner.