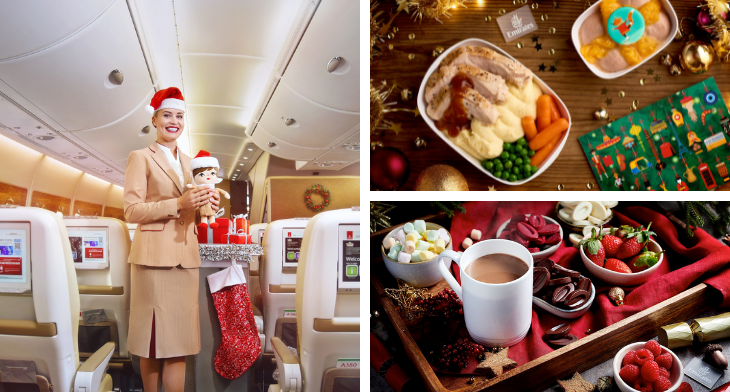 Emirates serves up Christmas spirit onboard

Emirates has revealed details of its festive onboard service.

Passengers in first and business class will be served a Christmas dinner beginning with lemon and herb king prawns served with fennel salad and cocktail sauce, or a classic salmon gravadlax. This is followed by roast turkey with chestnut stuffing, turkey bacon, paprika potatoes, and creamy Brussels sprouts with a cranberry jus lié. The menu is finished with a choice of delicious festive dessert.

Economy class passengers can enjoy roast turkey drizzled with cranberry jus lié, served with peas, roast potatoes, and pan-fried smoked chicken sausage. This is rounded off the feast with a chocolate mousse with mandarin compote topped with a festive chocolate button.

Those travelling on 24 and 25 December will also be offered a complimentary baked treat.

According to the airline, Emirates’ crew will be happy to take pictures of “your special moments onboard with your family or friends” and present it in a festive frame as a travel keepsake. 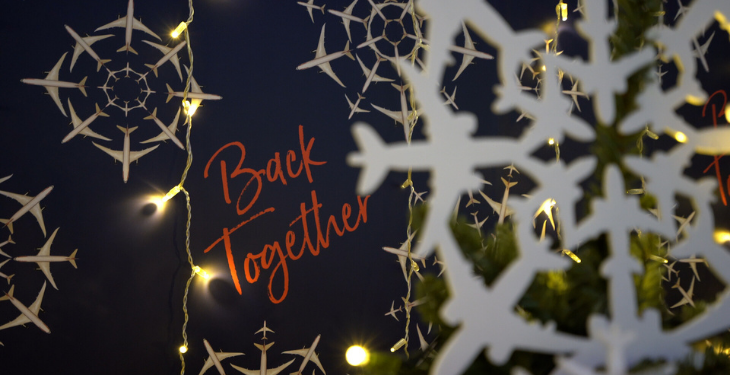 In the run-up to Christmas British Airways has surprised passengers with upgrades to Club World (business class) and exclusive lounge access at London Heathrow Terminal 5.

Tom Stevens, British Airways’ Director of Customer Experience said: “After what has been an incredibly difficult two years for everyone, we know how much our customers have been looking forward to being reunited with loved ones over such an important time. We wanted to treat our customers and go that extra mile to make their journey, wherever it may be, extra special.” 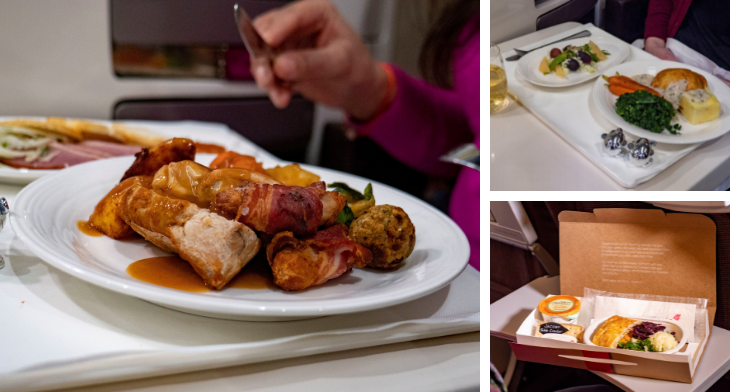 Virgin Atlantic gets into Christmas spirit

Virgin Atlantic is offering passengers a fun and festive menu to enjoy onboard.

All customers in all cabins travelling on selected flights from 24th-26th December will be able to tuck into festive feasts, featuring roast turkey with all the trimmings and a cranberry and thyme crusted salmon fillet.

The airline is also offering millionaire’s chocolate log over the Christmas period, and a cheese platter.

Passengers in all cabins will receive a mince pie and a Lindt chocolate bear.

Virgin Atlantic will mark New Year by serving passengers on select flights in the air at midnight on New Year’s Eve champagne and a milk chocolate star.

Corneel Koster, Chief Customer and Operating Officer at Virgin Atlantic, commented: “We know customers are so looking forward to their holidays or to be with their loved ones over the festive period, so we are eager to delight our customers from the moment they board our flights this Christmas. Surprising our customers with delicious feasts and treats is our way of creating memories and saying thank you for choosing to travel with Virgin Atlantic.

“Understanding the current challenges, our teams will ensure all customers fly safe and well and are more than ready to celebrate the festive period onboard, as we get our customers to their destinations in style. Many of our customers are flying to reunite with friends and family, so it’s incredibly important to us that we help make this a special experience.” 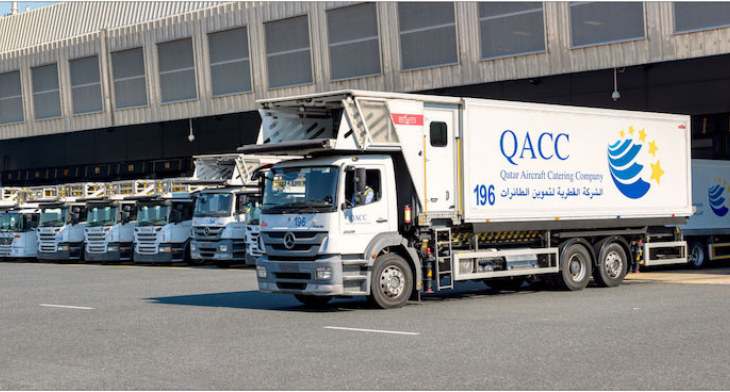 Catering Services Acting Senior Vice President, Sascha Von Wolfersdorf said: “Reflecting on this milestone after what has been aviation’s most challenging chapter, it is encouraging and reassuring to see travel back on the path to recovery. This achievement underpins QACC’s flexibility and agility to cater to the increase in demand, with the uptick of travel.

“I am optimistic about the future and confident we will see further growth. This is why we have invested in plans for a second unit that will involve acquiring and installing new production lines, to help meet the future catering needs of Qatar Airways that aligns with its continuous growth and the anticipated demand for travel around the FIFA World Cup Qatar 2022.”

QACC is also pursuing an in-house laboratory accreditation that will reduce costs and unlock future revenue streams by allowing it to become an authorised food testing facility for the State of Qatar. In addition, QACC is planning a greenhouse farming project that will lead to self-sufficiency in micro-herbs and green vegetation to help reduce the carbon footprint caused by imported goods. 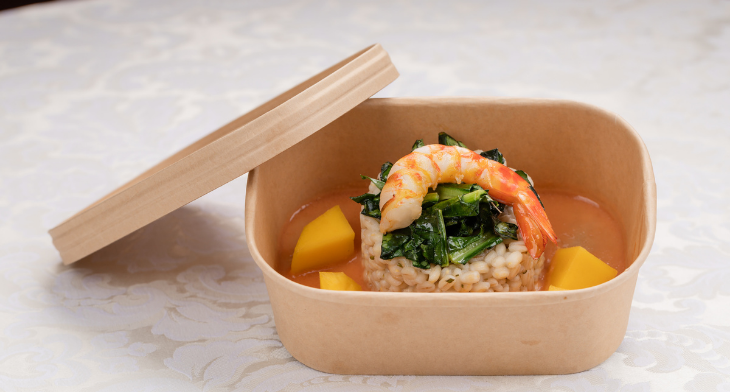 Air Dolomiti has relaunched its in-flight service on short- and medium-haul flights.

SpazioItaliaBar features fresh dishes created by Italian chefs, quick snacks accompanied by a wide range of hot and cold drinks and a selection of white, red and sparkling wines.

Air Dolomiti is collaborating with brands including JRE, Jeunes Restaurateurs d’Europe for the preparation of fresh dishes, Pasticceria Biasetto  for the creation of desserts and coffee from Illy.

“Our choice puts the preferences of the passenger first” commented Alberto Casamatti, CEO, Director General Operations & Accountable Manager of Air Dolomiti. “With this new service, we will be able to offer a wide range of top-quality products that will alternate over the months and satisfy different food preferences of our passengers.”

“This important improvement in the passenger experience is the result of months of intensive work. SpazioItaliaBar will allow Air Dolomiti to offer a better and individual on-board product, while reducing impact on the environment. Through this, we emphasise our commitment to offering the best possible quality to our passengers,” added Dario Bruni, Vice President Business Development, Product, ICT & Managing Director, Air Dolomiti Deutschland GmbH. 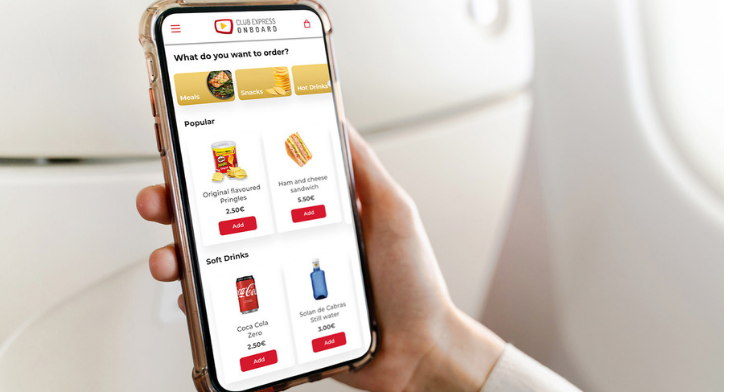 As part of its continuing investment in digitalising its onboard passenger experience, Iberia Express has digitised its onboard retail experience.

Working with Immfly and official catering provider DO & Com, the airline has introduced a new all-integrated crew app and user-friendly, smart back-office system improving the warehouse and inventory management process.

The new solution digitalises the Iberia Express Retail On Board menu proposition by enabling payments through an innovative all-in-one Android EPOS. This allows contactless transactions whilst its backend system manages the warehouse operations and inventory.

Immfly’s technology will also allow in-seat ordering, which will enable passengers to consult, order and pay for all onboard catering products from their own devices, making it a complete retail experience on personal devices.

This new retail capability is also available with Boeing Digital Direct, a complete digital services platform for any commercial airplane that combines the best of Immfly and Boeing for retail, ancillary revenue and wireless in-flight entertainment.

“At Immfly we are intensively working towards unlocking the full potential of inflight service and entertainment for airlines. With Iberia Express being the first to test out our new disruptive Retail On Board solution in the market, we are really confident in the efficacy of our service and payment technology,” said Pablo Linz, Immfly CEO.

“At Iberia Express we are committed to innovation and we pay special attention to the service we offer. Regarding this, we know that digitalisation is key to guarantee a seamless service for our customers, that is more suited to their new habits. These small details make a big difference, and we will continue working with Immfly and DO & CO to ensure that our customers receive an excellent on-board experience,” commented Paloma Cabañas, Head of Customer Experience at Iberia Express.

“At DO & CO we are eager to continue exceeding customer’s expectations. We have joined the on-board retail business to continue providing unique customer experiences. Through collaboration with Immfly, our technological partner, we have been able to provide Iberia Express with the necessary tools to deliver the best quality service to customers looking to enjoy premium freshly made products on-board,” stated Attila Dogudan, CEO DO & CO. 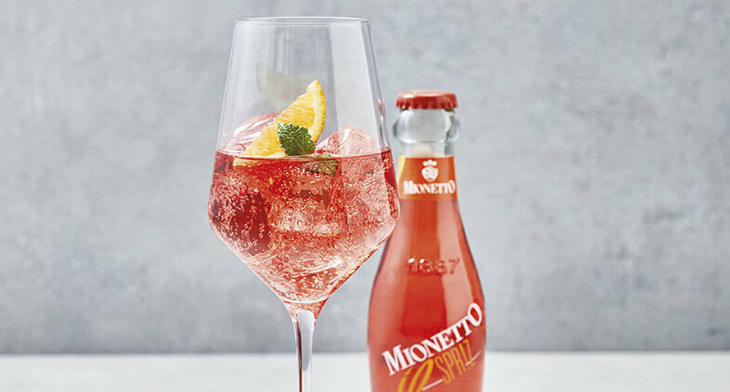 From 1 December, Lufthansa is giving passengers on 37 long-haul routes to North America, South America, Asia and South Africa, the opportunity to purchase high-quality snacks and spirits in addition to main meals and drinks, which will continue to be free of charge.

The service will then be available on all intercontinental flights in spring 2022.

The product range, offered under the name Onboard Delights, is based on the short-haul offer that Lufthansa introduced at the end of May 2021.

Baumkuchen from Dallmayr, kettle chips made from organic potatoes, and the Share organic nut bar are offered from regional production. With every purchase of the Share organic nut bar, one meal is donated to the Sunshine Project in India, which is supported by the help alliance of the Lufthansa Group. The beverage menu includes champagne and a variety of distilled spirits. 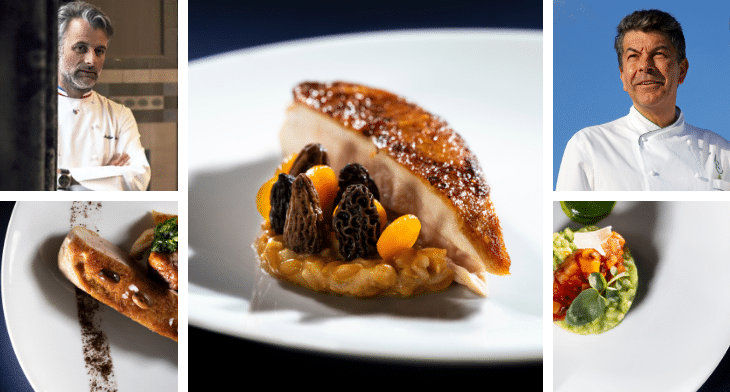 In the airline’s exclusive La Première cabin, three Michelin-starred chef Régis Marcon and the expertise of Servair Culinary Studio, of which he is President, have come up with six new tasty dishes.

In the Business cabin, Air France has, for the first time, entrusted its menu to two Michelin-starred chef Mathieu Viannay, with eight original dishes combining delicate flavours and local produce: 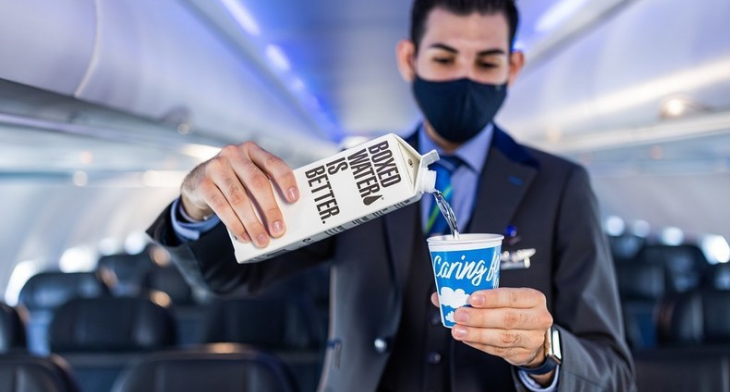 Alaska Airlines has begun the process of eliminating 1.8 million pounds of plastics a year through an expanded partnership with Boxed Water.

The carrier is replacing single-use plastic water bottles with 92% plant-based cartons from Boxed Water Is Better, and plastic cups with recyclable paper cups for water service.

“As a West Coast-based airline, we fly to some of the most beautiful places on earth. Protecting these habitats is critical for our collective future, and reducing plastic waste is a key step,” said Diana Birkett Rakow, Vice President of Public Affairs and Sustainability for Alaska Airlines. “We’re proud to partner with Boxed Water on our most impactful plastic-reduction initiative yet, on a continued journey to minimise in-flight waste.”

“We are grateful to Alaska Airlines for leading the airline industry with bold steps toward plastic waste reduction,” noted Daryn Kuipers, CEO for Boxed Water. “Our ability to scale with Alaska from First Class to main cabin in just six months demonstrates both operational feasibility and the interest travellers have in more renewable in-flight offerings.”

Alaska became the first airline to offer guests Boxed Water cartons in-flight in early 2021, introducing the renewable packaged water alternative in First Class and on Alaska’s Horizon Air-operated flights. The trial was a success with guests and employees, with surveyed fliers preferring Boxed Water over plastic bottled water at a rate of two-to-one.

“Only 9% of plastic is recycled nationwide- the rest ends up in landfills, burned or in our environment,” said Todd Traynor-Corey, managing director of guest products for Alaska Airlines. “Although we have an industry-leading recycling program, the reality is that we need to move to renewable options. Getting to this point hasn’t been easy. We investigated several options with our supply chain – and this year we finally found a product our guests love and a partner whose mission-driven values mirror our own.” 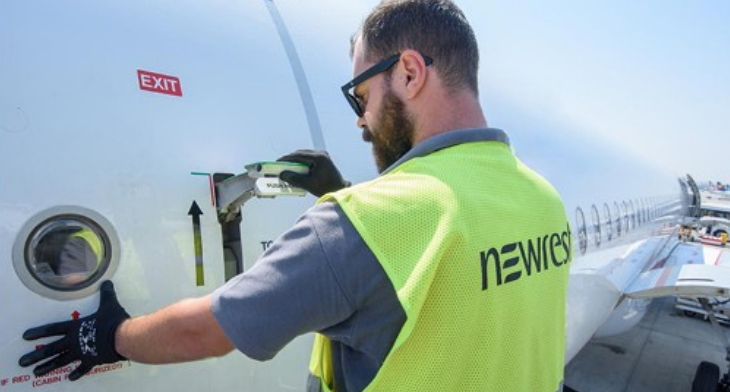 Newrest has become the majority shareholder of Flight Delight Air Catering, an independent company of the Käfer Service GmbH, group by taking a 60% stake in the company.

From its sites in Frankfurt and in Munich, Flight Delight Air Catering is specialised in high quality in-flight catering on long-haul routes to clients include airlines such as Air Canada, Air Astana, China Airlines, Latam Airlines and Saudi Arabian Airlines.

The merger creates a new entity, Newrest Germany, as Newrest looks to prioritise the in-flight catering market in Germany following the opening of its German subsidiary in 2020.

The added value for Flight Delight Air Catering lies in Newrest’s ability to extend the presence of Newrest Germany’s operations in Berlin and Hamburg to other German cities. Stuttgart and Hannover are, among others, named in the expansion ambitions of the entity.

Catering services are provided to a maximum of 211 passengers.

In South Africa, Newrest has started to provide in-flight catering services to Air Mauritius. Newrest worked in close collaboration with the Air Mauritius team based in Mauritius to finalise the on-board menu for the route that serves OR Tambo International Airport in Johannesburg. The flight operates three times a week on an A330neo aircraft.

Passengers will be served a blend of Ugandan and international food provided by Newrest’s chefs and aligned to its quality standards. A full bar service, as well as premium quality blankets and amenity kits will be also part of the on-board service. Newrest will adapt its offer to passenger feedback.