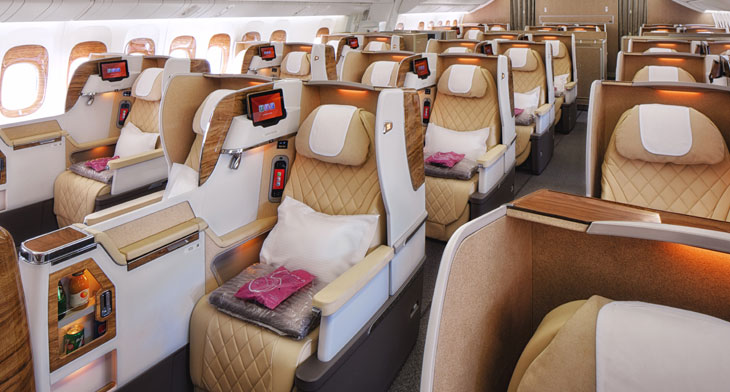 Space at the heart of new business class seats for Emirates

Emirates has unveiled a new business class cabin and configuration on its Boeing 777-200LR, following a US$150+ million investment to refurbish the 10 existing 777-200LR aircraft in its fleet.

The newly refurbished 777-200LR aircraft is set in a two-class configuration offering 38 business class seats and 264 seats in economy class.

With a pitch of 72 inches and ability to move into a fully flat sleeping position, the seat includes touchscreen controls for the seat and in-flight entertainment system, several personal lighting options, privacy panels between seats, a shoe stowage area, footrest and a personal mini-bar.

To increase the feeling of spaciousness, overhead bins in centre of the cabin have been removed.

The cabin also features the Ghaf tree – considered the national tree of the United Arab Emirates, and now a signature design on the latest Emirates aircraft.

In addition, the new business class cabin features a social area – unique to the Boeing 777-200LR fleet. The mini lounge area features snacks such as crisps, sandwiches and fruit, as well as beverages for customers to help themselves to during the flight.

Economy class seats have also been refreshed to the latest colour palette of soft greys and blues. The ergonomically designed seats come with full leather headrests that have flexible side panels and can also be adjusted vertically for optimum support. The aircraft is also equipped with Wi-Fi and Live TV across all classes.

The newly refurbished 777-200LR aircraft will go into service on 6 March to Fort Lauderdale, the first of 10 aircraft to be retrofitted with the new configuration over the course of the year. 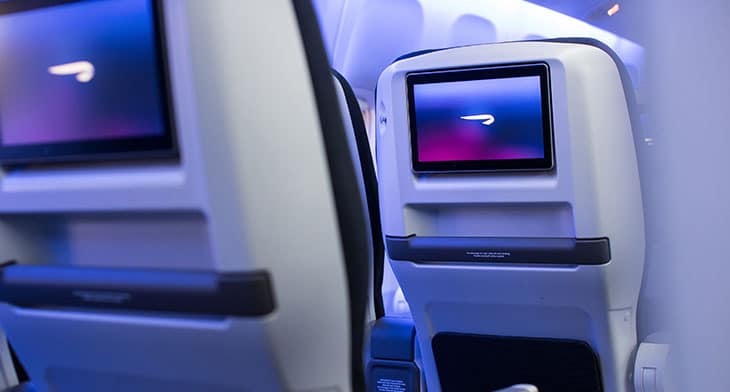 The new World Traveller Plus and World Traveller cabins, which have been fitted with elegant new seats with 50% larger entertainment screens, will roll out across the airline’s fleet of 10 long-haul aircraft based at Gatwick.

The six three-class Boeing 777 aircraft will be completed by winter 2018, with the three four-class variations finishing by summer 2019.
The new seats have been developed by the airline’s in-house design teams, in collaboration with an unnamed seat supplier.

Attention has also been paid to how the customer uses their seat, with the World Traveller Plus design featuring a new leg and footrest, as well as an improved fully adjustable six-way headrest to suit customers of all heights. The new seat also has a cocktail table at the front and in-arm tray tables. In response to customer demand the size of the World Traveller Plus cabin in the three-class 777s will more than double.

The World Traveller cabins have also been fitted with the newest, most enhanced seating, which feature a six-way headrest with adjustable ears for added comfort and movable middle arm rests, which is particularly useful for customers travelling with children.

The new in-flight Panasonic entertainment system has been updated with larger HD screens and gesture control to navigate the interface like using a tablet. The screen size will double from six to 12 inches in World Traveller Plus, and increase from six to 10 inches in World Traveller. New USB sockets are available at every single seat allowing all customers to charge a range of different electronic devices during their flight and World Traveller Plus seats also have an additional power outlet socket for UK, US and EU plugs.

Bespoke lighting has been fitted in every cabin and can be set to reflect the time of day, helping to lull travellers to sleep at night and wake them in the morning so customers arrive feeling fresher and the effect of jet-lag is lessened.

Sean Doyle, British Airways’ director of network and alliances, said, “We are one of the very few global airlines that offers a choice of four cabins for customers to travel in and World Traveller Plus appeals to a broad mix of both leisure and business travellers. In response to demand we’re increasing the size of the cabin so we can offer more of these popular seats to our customers, while keeping the cabin intimate and retaining the expert, attentive service that our travellers love.”