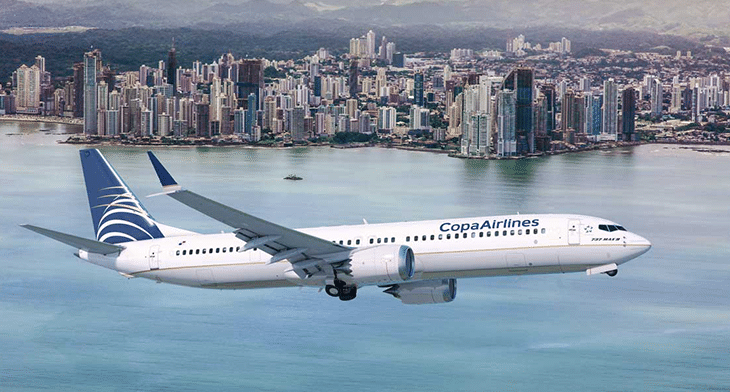 The new aircraft, which seats 166 across the classes, was heralded as marking a “new era” for the airline of “greater comfort, convenience and sustainability”.

Along with the new aircraft, the airline has also unveiled its new business class, ‘Dreams’ with 16 reclining lie-flat seats.

A renovated premium kit will also be available for passengers travelling in Dreams, depending on the destination of the journey, which will include headphones, larger pillows and blankets of high quality fabrics, as well as an amenities kit composed of a mask and socks with collectable designs in the Dreams concept.

The renewed economy class meanwhile will feature Meridian seats. Individual USB ports and while they don’t have seatback screens, they will feature a mobile device holder.

Passengers on the MAX 9 will be able to access entertainment content through the Copa Showpass wireless in-flight entertainment system (W-IFE), which can be accessed by connecting from a computer or mobile device.

“The MAX 9 means a new era in the more than 70 years of Copa Airlines,” said Pedro Heilbron, CEO of Copa Airlines. “With the arrival of this aircraft we incorporate the latest Boeing technology, which will be part of one of the most modern and young fleets in the industry. In addition, the MAX 9 is a symbol of development and growth that fills us with pride and motivates us to continue innovating, to be more efficient in our operations every day and to leave the name of Panama on the whole continent.”

The airline says the MAX 9 will also have a lower impact on the environment with an improved fuel efficiency of 14%, emitting 50% less polluting gasses and will also be 40% quieter.

The new MAX 9 was officially presented on 18 September and is the first of five aircraft the airline will receive between October and December this year, which will operate on the airline’s longest routes starting with San Francisco in December 2019.