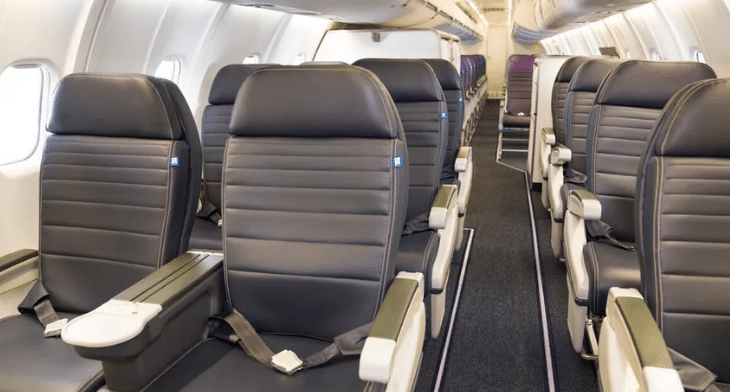 Bringing the experience of regional flights in-line with the rest of the airline’s network, United announced earlier this year that the aircraft would feature a two-cabin layout.

“Now you can enjoy a premium cabin experience on every leg of your journey – even the short ones – on routes from Chicago O’Hare,” the airline said of the new cabin, “And keep an eye out for flights on the CRJ-550 from New York/Newark and Washington Dulles.”

The aircraft offers space for over 50 carry-on bags in the overhead compartments and four carry-on cabinets, meaning “gate-checking will be a thing of the past,” the airline said.

Passengers seated in United First can help themselves to snacks and beverages from the self-service refreshment center.

The airline said its upgraded interior also has more Economy Plus seats than any other 50-seat regional jet. The airline has also launched a new 3D Seatmap for passengers to explore the cabin. The new seat map will also be available for additional fleet types soon, the airline said in a tweet.

Passengers onboard can also stay connected with United Wi-Fi.